O.M.G.
Phoenix, Arizona
Growing up my initials were OP, which was pretty cool in the 80's, right? Then I got married and my initials got updated to match our very texting obsessed era that we now live in (and shake our heads at)...OMG. For those who are texting illiterate, I'll spell it out..."Oh, My God!". I pity the girl whose initials are W.T.F. (I won't spell that one out. You can Google it or email me for an explaination on that one!)

We travelled to Prescott, Arizona last weekend. It's a short drive up north...less than 2 hours, even pulling a travel trailer at below posted speed limits due to strong winds. We decided we wanted to be home around 2pm, to avoid heavy traffic that is known to build up on the only direct northbound freeway out of Phoenix. Well, instead of missing it, we got right in the middle of it. 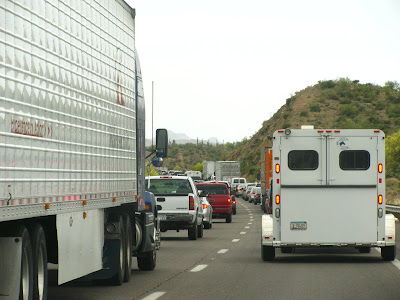 I think we went about a mile an hour. I don't know, I was busy snapping pictures. 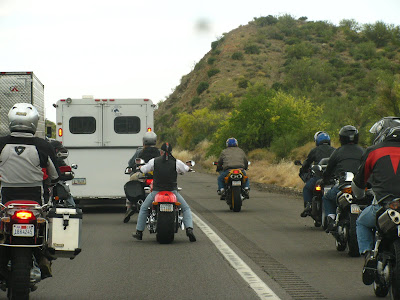 We were so proud of ourselves that we had 1)full tank of gas 2)our own toilet 3)snacks 4) left as early as we did.....and I even relished the idea that we could pull over and I could whip us up a fresh pot of coffee if we needed! All, in all, not a bad way to be stuck in our first official traffic back-up. I'm sure there will be more to come since we plan on travelling alot. 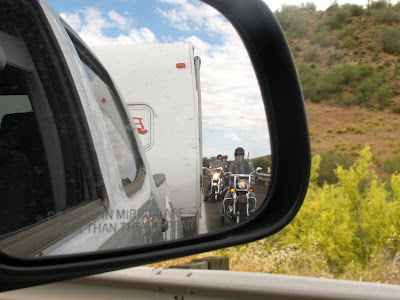 That's how our trip ended....which is way better than how the trip ended for some others. 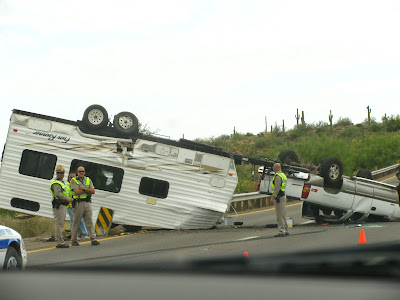 Yikes! It was very windy but I am sure this would never happen to us because Brian is such a safe driver....especially after I told him "DO NOT scare me again like you did that last time!" I think he got the point and we are happily ever after....love on the road.
Posted by O.M.G. at 5/24/2010 10:52:00 AM